How To: Dashcam Install

Amazon had this Aukey camera on a one-day sale with a 32GB microSD card a while back and the deal was good enough I couldn't pass it up.

I did a little playing around with the positioning and found right under the center of the mirror put it out of the way. 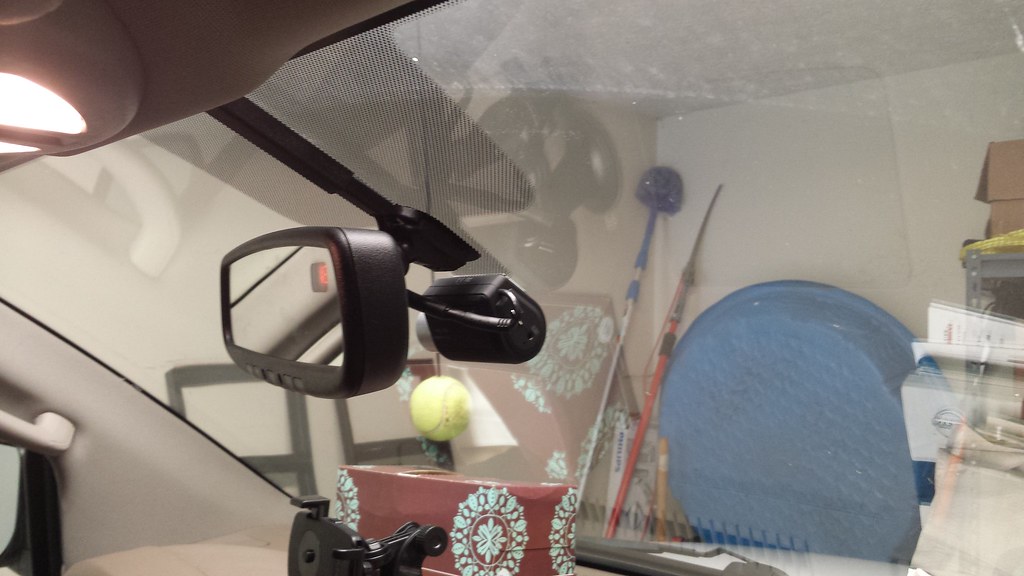 The wires are already run in this picture, but it was pretty straightforward. I used the cladding over the wires for the auto-dimming mirror to run the wire up to the headliner, and tucked it under the headliner all the way to the a-pillar cladding. I pulled the handle so I could separate the cladding from the a-pillar, and ran the wire all the way down to the bottom.
The glove box had to come off for access to the bolts of the fuse panel, and to have working room for the wiring.

Here's where the wire comes 'out', and I tucked it around behind the fuse box with the rest of the wiring harnesses, then ran the pigtail wires up to the dashboard from the bottom. The wire poking out from the weather-stripping, and then below the fuse panel is the one in question. 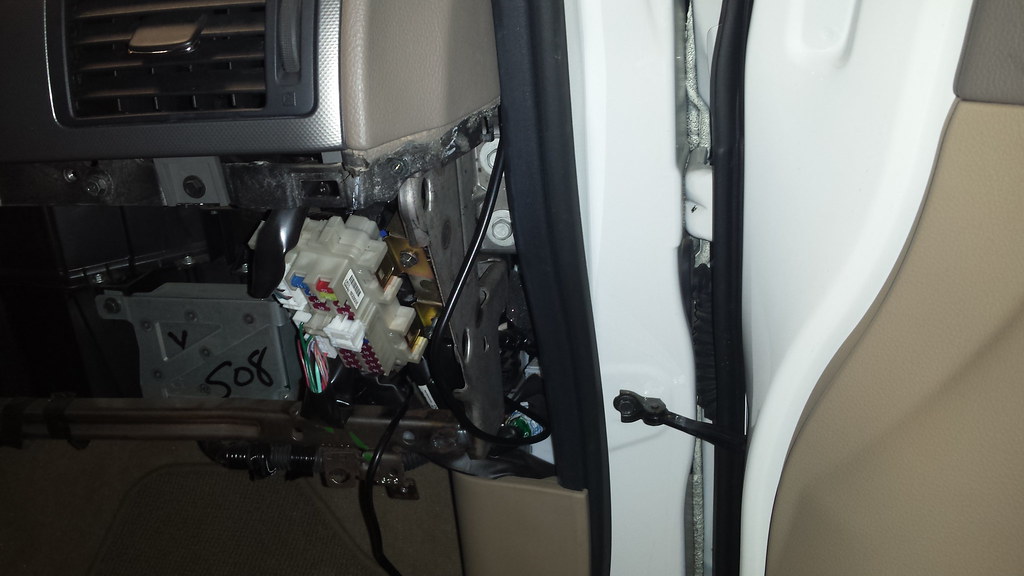 The wiring harness had built-in fuse taps for power, however a) the Armada doesn't use mini-fuses, but uses low-profile mini fuses, and b) there aren't really enough available fuse slots (at least on my 4x4 SV, which has the Driver Package). Given that, I picked up a set of Add-a-Circuit low-profile fuse taps and did a little basic wiring. 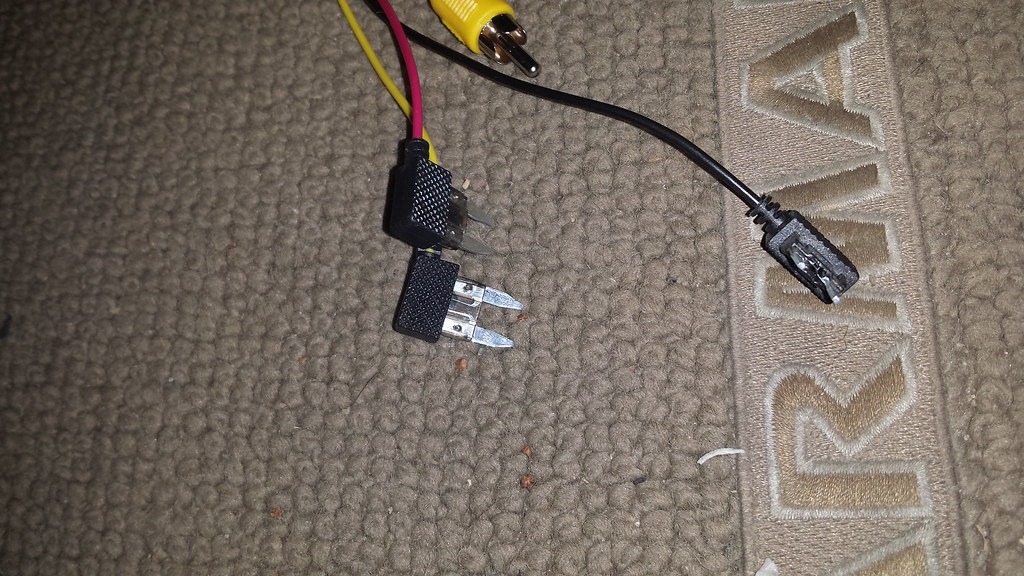 I tied the other 2 wires into non-critical circuits, just in case. It seemed like the safer thing to do. For the battery lead, I used the dome lights, and for the accessory I tapped into the power mirrors. 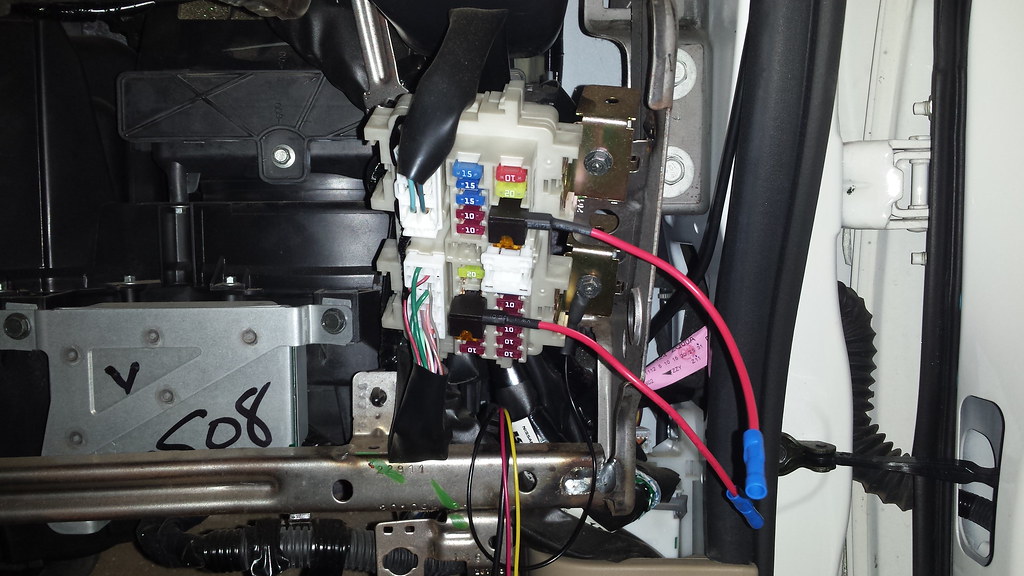 And finally, a crappy picture of what you see when it's all back together, with the fuse panel cover off. 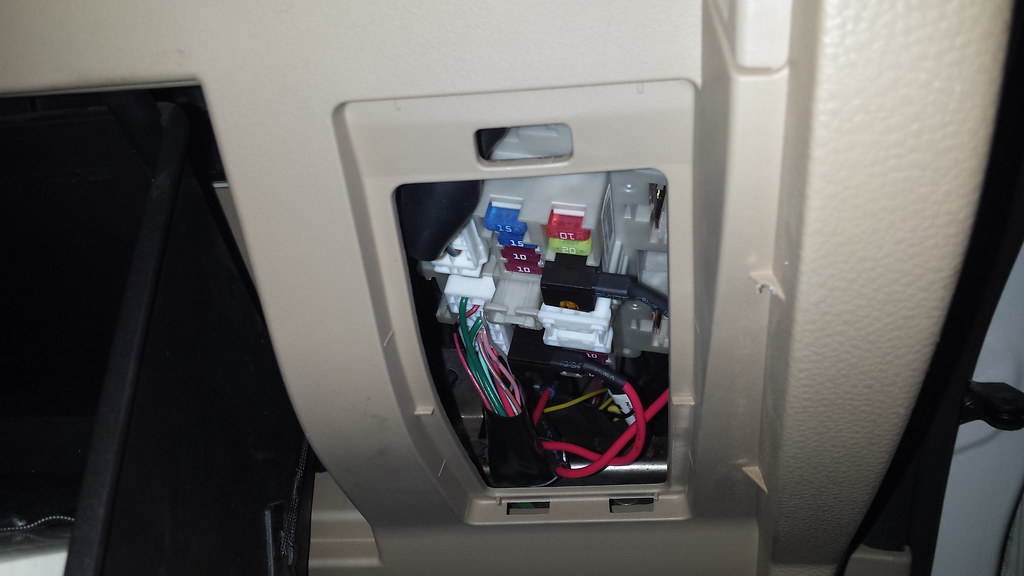 Didn't take more than an hour, and it was a job that involved my 2 least favorite parts of automotive work: messing with wiring and interiors. The Armada is a super easy beast to work on by modern car standards.

You can set it to turn on with motion, I haven't though. It comes on with the key for now...but now that I think about it, might as well enable the motion detect. It's there, and memory is basically free. It's not like it'll run out of film.
A

Joined Mar 4, 2014
·
162 Posts
Make sure it's playing in HD, but it looks really good. Not sure when the next time I'll be driving at night, but I'll probably pull 1 from there too. The video is saved in ~85MB, 1 minute chunks, and you can press a button on the camera to "lock" a video so it won't get overwritten as you're going to save an incident.

Joined Jul 12, 2011
·
145 Posts
That is a nice set up..built in look and very clean.mine is portable one(both front and rear).for the front i have the papago and the rear is the very cheapest one $15 on amazon w/ very clear video w/ crappy audio record(lots of rattle sound like).


Sent from AutoGuide.com Free App
A

Joined Mar 4, 2014
·
162 Posts
I like that (other than it taking up windshield real estate) I was considering getting one of the integrated 2-camera systems but the price was more than I wanted to spend for this.

Are you powering both cameras from 12v power sockets? Or are they wired in? Does the screen stay on all the time? Or does it cut off after the camera boots up?

Joined Jul 12, 2011
·
145 Posts
Both power to 12 volt socket.and tuck the long wire..the papago dash cam you can go to the route of hot wiring it,you have to buy the kit separately through amazon or ebay.
A

charlie1978 said:
Both power to 12 volt socket.and tuck the long wire..the papago dash cam you can go to the route of hot wiring it,you have to buy the kit separately through amazon or ebay.
Click to expand...

I gotcha. Alternately, you could wire them directly into the wires of the 12v sockets with a little effort if you didn't want to get their kit.
M

i also ran my wiring as in the first post here. up the headliner and down the rubber trim to fuse panel.

the rear cam is a usb cable so it ran under the kick plates on the driver side and under the wheel whell finisher up the rear inside finisher to the top of the rear trunk lid.

not difficult but tedious...

Joined 7 mo ago
·
2 Posts
I have the cobra ccdc4500 dual-camera system. I'm having trouble power on the unit. I bought a generic hardwire / fuse tap kit off Amazon (Eknic Brand). What do I need to do to get this working on my 2015 Nissan Armada Platinum???
M

for power you can tap into the rearview mirror.

you can run a wire down the A pillar to the fuse box under the dash.

Joined 7 mo ago
·
2 Posts
I got everything figured out now. It’s all about trial and error in life! Anyways I just used my multimeter to help me along the way. I plugged the fuse tap into the mirror control fuse location and used the factory 10 amp fuse. I grounded my wire under a factory screw that’s grounded to the body of the car. Make sure the fuse tap red wire is facing toward the right side of ten car. After all that craziness you just have to run your cables underneath the headliner and weather seals of the car.
W